Valentine Valley is the 208th episode of Candy Crush Saga and the third episode of World 42 (HTML5). 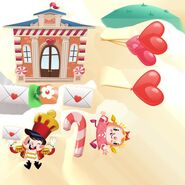