Vanilla Villa is the 133rd episode in Candy Crush Saga and the third episode of World 27 (HTML5). This episode was released on 7 September 2016. The champion title for this episode is Mirror Master.

Mr. Toffee wants to have tea with Tiffi, but he's too tall to fit in the vanilla villa. Tiffi brings out a fun house mirror, having tea with Mr. Toffee's reflection instead. 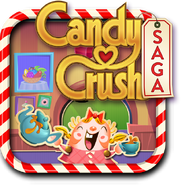