Wacky Waterhole is the 105th episode in Candy Crush Saga and the fifth and final episode of World 21 (HTML5). This episode was released on 24 February 2016. The champion title for this episode is Bubbly Barista.

Tiffi gives a long straw to Suzy so she can drink from the waterhole.

Wacky Waterhole is a somewhat easy - medium episode, with a mean of 3.43. Although there are many easy levels, it also contains one somewhat hard level: 1560, two very hard levels: 1557 and 1564, one extremely hard level: 1565, and one variable level: 1561. Overall, it is much easier than the previous episode, Biscuit Bay. 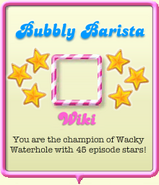 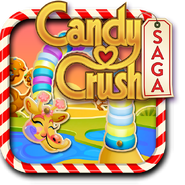