Wafer Windmill is the 41st episode in Candy Crush Saga and the fifth episode of World Seven. This episode was released on 11 June 2014. The champion title for this episode is Wafer Vagabond.

Wafer Windmill is a medium episode, with a mean of 3.53. It has four somewhat hard - hard levels: 591, 594, 596 and 599. It also contains level 600, the first level in which a dispenser dispenses three types of things. Overall, this episode is harder than the previous episode, Gummy Gardens.

Hi there! Looking for something?

Yes! I lost my wafer! Soon I'll eat the windmill!

Hold on! I'll find it for you!

Let me use a detector to find the wafer.

Terrific! Thanks a lot!
Add a photo to this gallery 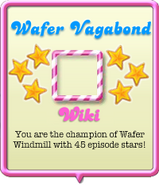 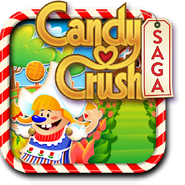 Retrieved from "https://candycrush.fandom.com/wiki/Wafer_Windmill?oldid=1605889"
Community content is available under CC-BY-SA unless otherwise noted.