Waffle Ward is the 235th episode in Candy Crush Saga and the fifth and final episode of World 47 (HTML5). This episode was released on 13 June 2018. The champion title for this episode is Biking Baker.

Tiffi and Cherry Baroness use parasols to shield themselves and the waffles from the sun.

Many new things are introduced: 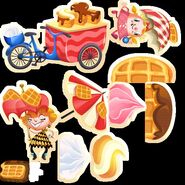