Waffle Well is the 204th episode in Candy Crush Saga and the fourth episode of World 41 (HTML5). This episode was released on 27 December 2017. The champion title for this episode is Graceful Gardener.

Misty wants to drink milkshake from the well but there's only a small amount left at the bottom. Tiffi gives her a giant straw so she can reach the milkshake. 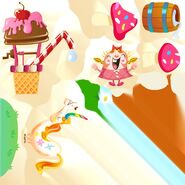 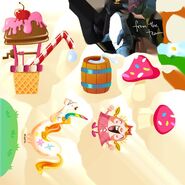