Wavy Waterfront is the 443rd episode in Candy Crush Saga and the third episode of World 89 (HTML5). This episode was released on 11 March 2020. The champion title for this episode is Surfer Smasher.

Tiffi surfs while Barry eats cookies from the jar. 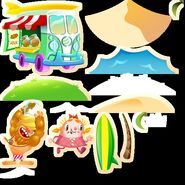