Whimsical Waves was the 42nd episode in Dreamworld and the sixth and last episode of World 7 of Dreamworld. This episode was released on 25 March 2015. It was the Dreamworld equivalent to the Reality episode Cereal Sea.

Tiffi becomes gigantic, and Dexter becomes tiny. Tiffi, wearing a crown with cereal on it, flips Dexter with her spoon.

Whimsical Waves is a medium episode, with a mean of 3.73. It has only four somewhat hard-hard levels: 608, 610, 611, and 615, as well as a very hard level: 607. Overall, it is much easier than the previous episode, Twilight Tulips, and has the same difficulty as its Reality counterpart, Cereal Sea. Like Gelato Grotto, the episode overall gets easier as the player goes along. 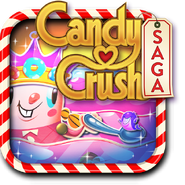 Retrieved from "https://candycrush.fandom.com/wiki/Whimsical_Waves?oldid=1619446"
Community content is available under CC-BY-SA unless otherwise noted.