Wondrous Well is the 345th episode in Candy Crush Saga and the fifth and final episode of World 69 (HTML5). This episode was released on 31 July 2019. The champion title for this episode is Coin Collector.

Tiffi uses a magnet to retrieve chocolate coins from the well for Misty. 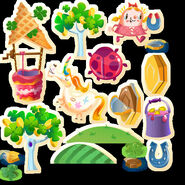