Wrecky Workshops is the 333rd episode of Candy Crush Saga and the third episode of World 67 (HTML5). This episode was released on 19 June 2019. The champion title for this episode is Saucer Sheriff.

Allen's blue spaceship is heading for the factory. Tiffi acts as an air traffic controller and guides his ship down safely. 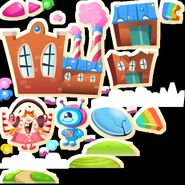 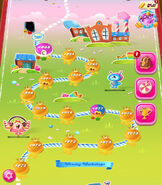 Map of Wrecky Workshops
Add a photo to this gallery

Retrieved from "https://candycrush.fandom.com/wiki/Wrecky_Workshops?oldid=1606194"
Community content is available under CC-BY-SA unless otherwise noted.