Yummy Yard is the 228th episode in Candy Crush Saga and the third episode of World 46 (HTML5).

Boomer is having difficulty flying up to the hive to collect honey. Tiffi puts three balloons on top of him to make it easier to fly. 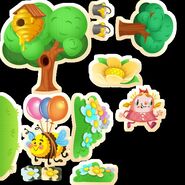 Retrieved from "https://candycrush.fandom.com/wiki/Yummy_Yard?oldid=1398064"
Community content is available under CC-BY-SA unless otherwise noted.